"Lately Arrived from London" has arrived!

In early summer one of the quilters at the Great Lakes Seaway Trail pre-ordered the fat quarter sampler of Moda's "Lately Arrived from by Barbara Brackman.  It was not expected to ship until mid-September but what a pleasant surprise she had when it arrived on Saturday!  It is lovely and we are not aware of any other major fabric lines that accurately reflect the early 1800 era. You may want to ask for it at your favorite quilt shop. Here is the line's description from the Moda website: 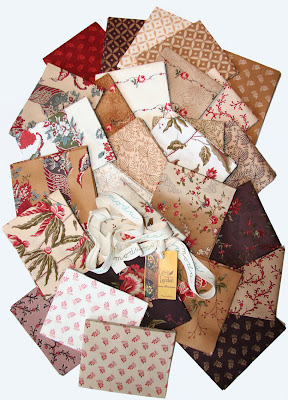 "Lately Arrived from ” will delight fans of early calicoes and chintzes. The collection recreates fabrics from the turn of the 19th century when Americans imported their cottons. Traders brought the world’s luxury goods to wharves in Philadelphia, and . Each piece is named for a trading ship that sailed into American harbors - the Charming Betsy, the Brigantine Sally, the Ship Surprise.
The reproductions are copied from Dutch, Indian, French and British document prints, the type advertised in 1771 by John Hunt of New York. “Fine sprig’d muslins for gowns, fine border'd and other chintzes; … furniture calicoes.” 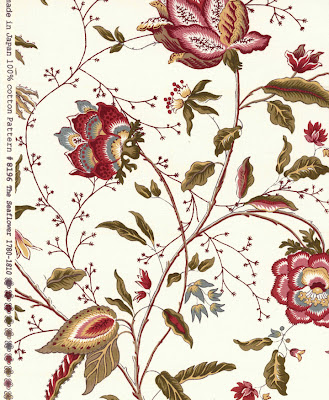 Colorways echo natural dyes with
colors named for the styles of
the times: blue, red,
Pompadour purple, Nankeen tan and Muslin white. The prints range from a neat geometric and leafy sprigs suitable for a lady’s dress to “furniture calicoes,” the chintz-scale fl orals. The furniture calicoes include a pillar print perfect for an 18th-century bed hanging or a 21st-century quilt border.